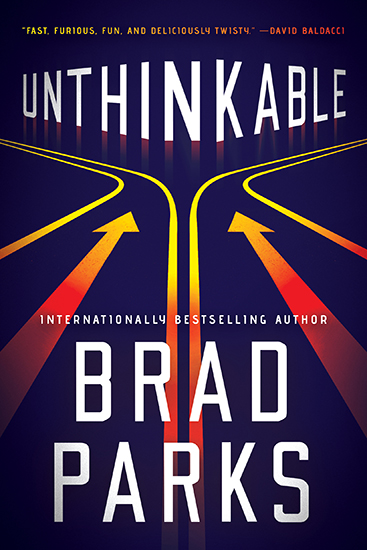 From international bestselling author Brad Parks comes a new thriller about an ordinary man who may be able to save the world as we know it—but to do so, he must make an impossible choice.

Nate Lovejoy is a self-proclaimed nobody, a stay-at-home dad who doesn’t believe he’s important to anyone but his wife and their two daughters. So it’s a shock when members of a powerful secret society kidnap and spirit Nate away to a mansion at the behest of their leader, Vanslow DeGange, who claims to know the future. He’s foreseen that a billion people could die—unless Nate acts.

It seems improbable, especially given what DeGange says will set this mass casualty incident in motion: a lawsuit against the biggest power company in Virginia, being brought by Nate’s wife, Jenny.

Nate quickly smells a scam being perpetrated by the power company. But at every turn, it becomes apparent there’s more to DeGange’s gift than Nate wants to acknowledge. A billion people really could die, and Nate might be the only one who can save them.

All he has to do is the unthinkable.

“Parks makes suspension of disbelief to his premise accessible via solid prose and characterizations. Readers who enjoy jaw-dropping but credible plot twists will be enthralled.”
—Publishers Weekly (read more)

“Unthinkable is a fast, furious, fun and deliciously twisty tale told with the deft and accomplished hand of a veteran storyteller. Nate and Jenny are truly a duo to root for, and there’s a substantive issue at the core of the story about which we should all be better informed. Parks has belted another one out of the park with a focused swing of the bat.”
—David Baldacci, No. 1 New York Times bestseller

“Unthinkable demands we put up with much foolish behavior on Nate’s part, but those who stick around will be rewarded with turns of fate and twists of plot more shocking than even the clairvoyant DeGange may have foreseen.”
—The Wall Street Journal (read more)

“The story is inventive, well written, fast-paced, and filled with twists. And chapters alternating between Nate’s and Jenny’s points of view add depth and tension.”
—Associated Press (read more)

“The strong, taut suspense and the dramatic conclusion make this hard to put down.”
—Booklist

“Unthinkable is an effective and memorable work that will force readers to think hard about the circumstances in which these characters are involved, while wondering what they would do if they were faced with the same challenges.”
—Book Reporter (read more)

“In the unlikely event you are encountering Parks for the first time, it is also clear he knows how to pace a thriller, how to ratchet up the tension by degrees, how to keep you riveted to the narrative in anticipation of what will come next.”
—Jersey’s Best (read more)

“The ongoing battle between the concept of free will and predestination makes Unthinkable so intriguing, along with the mystery behind this strange organization and the nature of their true intentions. Parks has created a dynamic, vivid and incredibly interesting world with Unthinkable.”
—Culturess (read more)

“My, oh, my! Brad Parks has done it again! He’s crafted a world-class thriller . . . This is a story worth reading, hard to put down and a REAL page turner.”
—Virginia Gazette (read more)

“Unthinkable is a driving, single-sitting narrative with twists and turns credibly woven into an engrossing plot.”
—Watauga Democrat (read more)

“The premise demands a big leap of faith, but the payoff is a fun and hard-to-put-down thriller.”
—Ellery Queen

“Parks’ skill at creating realistic, strong characters makes the twists in Unthinkable believable as they confront evils they didn’t even know existed while proving their inner strength. Nate and Jenny’s unconditional love and respect for each other further buoy the gripping plot. And, yes, Parks makes you believe in predicting the future.”
—Oline Cogdill, South Florida Sun-Sentinel (read more)

“A mind bending thriller with a gripping, twisted plot you will second guess until you reach the stunning end. Unthinkable is addictive.”
—Melinda Leigh, #1 Wall Street Journal and Amazon bestselling author