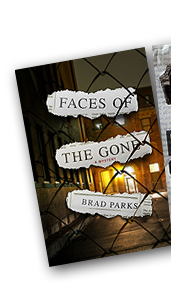 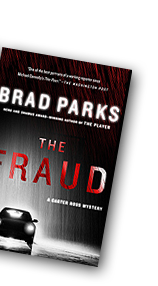 "This is the most hilariously funny and deadly serious mystery debut since Janet Evanovich's One for the Money."
—Library Journal

"Parks' writing is graceful and often gripping, and he creates a handful of vivid characters, both journalists and their sources. His portraits of the city and its drug trade, the newspaper, and Carter's journalistic techniques all sound knowing... This could develop into a solid series."
—Booklist

"This terrific page-turning debut features a likable protagonist, engaging supporting characters and some witty and amusing dialogue. Readers will want to see where this compelling tale takes them."
—RT Book Reviews

"A first-rate crime thriller. . . Faces of the Gone is gritty and hard boiled, but with a sly sense of humor. This strong and confident debut is sure to make an appearance on many "best of" and awards lists. Parks is a bright new talent whom readers will hopefully be able to enjoy for years to come."
—Chicago Sun-Times

"A well-paced whodunit... Faces of the Gone works well on several different levels. Whether your interest is a well-crafted mystery with a surprising twist or two, the newspaper industry or New Jersey geography, you're almost certain to find some things you like in it. Perhaps more than few."
—The Asbury Park Press

"Impressive debut... Carter's fresh voice, his willingness to be entertained balanced by honest sympathy and some sharp editorializing, is the book's considerable strength. The action, including a string of bombings, is brisk; the villain's identity is elusive; and the settings (from the projects to National Drug Bureau offices) ring true. How could this be better?"
—Houston Chronicle (read the full review)

"The novel reads like a bit of investigative journalism: told in reporter's prose, with dollops of humor, suspense, and violence. Like his creator, Ross is aware of the pain in the things he writes about. He's also aware that makes for darned good reporting."
—Booklist

"An enjoyable second mystery featuring a street-smart investigative reporter (after 2009's Faces of the Gone)... Once again, Parks, a former Washington Post reporter, deftly brings the personalities and dynamics of a modern-day city newsroom to life."
—Publishers Weekly

"Who says white men can't jump? ... Street-smart Carter, appearances notwithstanding, has all the moves he needs to stay one step ahead. Or one jump. A breezy, entertaining sequel to Parks' well-received debut."
—Kirkus Reviews

"Zany characters, witty dialog, and a plot that races to a bang-up finish are guaranteed to have readers cheering for the good guys. Parks's sequel to his acclaimed debut, Faces of the Gone, is as good if not better. Think Lisa Scottoline meets Richard Yancey." Starred Review
—Library Journal

"A capable follow-up to this author's award-winning debut mystery... Mr. Parks, himself a former newspaperman, knows this turf well. In the course of showing Ross nailing down the story, he has a lot of fun with office politics, Ross's love life, and the desire that a put-upon reporter may sometimes feel to have a conversation with a sympathetic Coke machine."
—The Wall Street Journal (read the full review)

"Fast-paced, thoroughly satisfying... Carter Ross is not only a first-rate investigative reporter; he's also a first-rate comic. It's a rare mystery that provides a good laugh on almost every page. One can only hope that Brad Parks has more mysteries for Carter Ross to solve in future books."
—The (Newark, N.J.) Star-Ledger (read the full review)

"Eyes of the Innocent is the complete package. With wonderful prose, witty observations and a relentless drive, this book held me hostage until the last page. Well done, Brad Parks!"
—Michael Connelly

"With Ross' keen editorial observations, his self-deprecating humor and his supporting cast of characters, "Eyes" is a welcome addition to my shelves of newspaper noir."
—Milwaukee Journal-Sentinel (read the full review)

"An engaging and exciting crime novel series... Brad Parks is another wonderful modern New Jersey noir novelist to go on the shelf next to Harlan Coben."
—Connecticut Post (read the full review)

"Reporter as detective hero isn't anything new, but few have been as convincing in the dual role as inkstained wage slave Carter Ross, the fearsomely articulate hero of Parks' fine new novel... Ross believes that the mark of a life well lived is the caliber of stories you tell in your last days. From the evidence here, he's living a masterpiece." Starred Review
—Booklist

"Brad Parks has crafted another complex and satisfying mystery, full of suspense and newsroom intrigue."
—The (Newark, N.J.) Star-Ledger (read the full review)

"A tantalizing tale that...[combines] grit and wit. Parks not only intrigues the reader with his plot but also impeccably depicts newsrooms and their denizens."
—Richmond Times-Dispatch

"If I were buying a beer for Carter Ross, the irreverent 'unrepentant newspaperman' for the struggling Newark Eagle-Examiner, it would be a local brew served in a bottle and not something foreign served in a glass. He's that kind of guy, and I'm happy he's back in Brad Parks' The Girl Next Door"
—Milwaukee Journal-Sentinel (read the full review)

"Through his portrayal of newsroom culture and the ailing (if once-mighty) American independent paper, Parks ascends the more pulpy shallows of the genre. The Girl Next Door is perfect for the reader who loves an LOL moment but wants a mystery that's more than empty calories."
—Shelf Awareness (read the full review)

"This is a tautly written page-turner with charm and humor, a terrific combination that is sure to appeal to David Rosenfelt and Janet Evanovich fans." Starred Review
—Booklist

"Parks nails the newspaper milieu and the Newark setting, while his solid cast of characters should keep readers eagerly awaiting the next installment."
—Publishers Weekly (read the full review)

"While many authors are adept at balancing suspense with humor, few rival Parks, who will leave you breathless one minute and laughing out loud the next. This is an admirable feat unto itself, and, coupled with a protagonist as likable (and occasionally incorrigible) as Carter Ross and the series' authentic backdrop, it makes for a most pleasant and informed reading experience. It's been said that easy reading makes for damn hard writing, and if The Good Cop is any indication as to the truth of that statement, Brad Parks is an overachiever."
—Hartford Books Examiner

"Expect a complicated, thrilling ending with a splash of mayhem. Parks, a gifted storyteller (with shades of Mark Twain or maybe Dave Barry), shows his mastery of the comic absurd behind serious journalism." Starred Review
—Library Journal

"Muckraking has rarely been so meaty or so funny." Starred Review
—Kirkus

"Compulsively readable. . . Ink-stained heroes are a dying breed. Enjoy this one while you can."
—Booklist

"While he spins a serious yarn, he injects enough humor that generates grins. But remember: Grins expose teeth, and The Player delivers a bone-crunching bite."
—Richmond Times-Dispatch (read the full review)

"Parks' sixth Carter Ross story (has) a more serious, reflective tone than previous entries, noted for their comedic appeal. Series fans should rest assured, however, that Carter's witty turns of phrase are still in evidence, and his undeterrable investigating is as engaging as ever."
—Booklist (read the full review)

"The sixth in Brad Parks' award-winning series is as entertaining as its predecessors, and the congenial, self-deprecating Ross gives readers a laugh on every page."
—Inside Jersey (read the full review)

"The Carter Ross series (has) all the excitement and drama of a Hollywood action flick... A terrifically entertaining page-turner."
—Fredericksburg Free Lance-Star (read the full review)