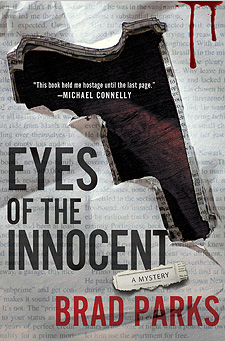 EYES OF THE INNOCENT
Chapter 1

I made at least four mistakes that Monday morning, the first of which was going into the office in the first place. There's an old saying among newspaper reporters that news never breaks in the newsroom. So if you're not currently working on a story, you ought to be out finding one. If you hang around the newsroom with nothing to do, you put yourself at extreme risk of being assigned something to do by an editor. And—ask any writer, anywhere—editors are approximately 98 percent full of stupid ideas.

Which leads to my second mistake: wandering by the open office door of my editor, Sal Szanto. I'm an investigative reporter for the Newark Eagle-Examiner, New Jersey's largest newspaper. My last story had been what we in the business call BBI. Boring But Important. It was a piece about patronage hiring in a nearby county government. (My suggested headline, "County Keeps Nepotism in the Family" was rejected as being too cheeky). The thirteen people who actually bothered to read it—the same thirteen people who read all our BBI's—were very impressed. To everyone else who picked up our Sunday paper, I suspect it were merely an impediment on the way to Sudoku.

Either way, it was now yesterday's news, making me an investigative reporter momentarily lacking anything to investigate.

And so we arrive at my third mistake: not feigning deafness when Szanto croaked out my name.

That's "Carter Ross," for those who don't understand the peculiar dialect of my fifty-something, chain-smoking, antacid-devouring, coffee-guzzling editor. Szanto has difficulty pronouncing vowels when he's upset, stressed or tired—which, with the way newspapers have been going the last few years, is most of the time. It usually takes him a couple of sentences to lift his vocal chords out of the gravel and start speaking coherently.

I took that to mean, "Have a seat." So I did. Szanto cleared his throat.

"You read the fire story this morning?" he growled. "The thing with the two kids?"

A fast-moving fire at about nine o'clock the night before swept through a house on Littleton Avenue in Newark, killing two little boys, Alonzo and Antoine Harris, ages four and six. The Newark Fire Department was offering no theories about what started it. The whereabouts of the mother, Akilah Harris, were unknown as of press time—which did not exactly speak well of her custodial abilities.

We had given the story the usual tragedy treatment, with a large photo of the blackened house along with smaller headshots of the little boys—smiling school portraits—along with a story gang-written by the herd of semi-supervised interns we have working on the weekends. During my eight years at the paper, we had probably written variations of the story fifty times—albeit with changed names, dates and places—so maybe I should be more calloused to it by now. But it still rips my guts out.

Szanto had this look on his face I couldn't quite place. Just like Eskimos have fifty different words for snow, Szanto has at least that many pained expressions. Parsing them takes a certain amount of expertise. The difference between "I'm pained because an intern just handed me a story that might as well be in Farsi" and "I'm pained because I ate hot wings for lunch" could be as subtle as a slight lowering of the lip or an extra furrowing of the brow.

I this case, it was neither.

Now it was my turn for a pained expression. Brodie is Harold Brodie, a living newspaper legend who had presided over our newsroom as executive editor for the last quarter century. Now in his late sixties, he was basically a nice man, with a high-pitched voice and eyebrows that could use some serious manscaping. He was small and fragile in a way that sort of reminded everyone of their grandfather. As a leader, he was the most benign of dictators. And more or less everyone loved him.

But he was still an editor, and as such he was as prone to stupid ideas as any other editor. Plus, he had this tendency to get fixated on certain subjects.

Spaceheaters was one of them. Like many of the nation's more depressed cities, Newark had its share of unimaginably horrid slum buildings where the heat may or may not be working—thanks busted boilers, pilfered pipes or landlords who decided the best way to combat the high cost of heating oil was to abstain from buying any.

One of the ways tenants survive this injustice is to plug spaceheaters into their already overloaded electrical sockets and leave them on 24-7. Fire safety-wise, you'd do just as well tossing an unsupervised ten-year-old into room with oily rags, lighter fluid and matches.

As a result, we had written about the perils of spaceheaters at least once every winter since I started at the paper eight years ago—and probably for many years before that. The only surprise was that December and January had been so mild we made it all the way to February without running one.

"Did a spaceheater have anything to do with it?" I asked.

"How the hell should I know?"

I did. Some editors cajoled writers into doing stories with threats or loud demands. Brodie went more for the Chinese water torture approach, drip-dropping in on you until you just gave in. Sometimes, when he approached you from behind, he jingled the change in his pocket just so you knew he was there. Most longtime Eagle-Examiner reporters, trained by years of Brodie jingling, stiffened reflexively when they heard nickels and quarters banging together.

"Can't we just re-print one of the old spaceheater stories?" I asked. "I seem to recall from the archives the eighty-eight spaceheater story was a classic—fruity yet full-bodied, with hints of singed circuit breaker."

Szanto hit me with pained look No. 28—upturned lip, creased forehead—and I gave in.

"Fine," I huffed. "A spaceheater story."

I went to lift myself out of the chair.

"I want you to work with Sweet Thang," he said.

I sat back down. Sweet Thang was what Szanto—and most of the other cave-dwelling editors in the building—called our newest intern, a honey-haired twenty-two-year-old Vanderbilt graduate whose real name was Lauren Somethingorother.

Between her button nose, bright blue eyes and a torso that rather nicely filled out a sweater set, she hadn't lacked for mentoring from some of the men in the office.

The only problem was, there was a rumor out she had gotten the job because her father and Brodie golfed together at their country club. So while working with her would improve the scenery, it did come with certain dangers.

"Just make her feel like she's doing something important, then when it comes time to write, make sure she's in a different county from your keyboard," Szanto said.

It was only a stupid spaceheater story. I could knock it off in a few hours and then move back to real journalism. As I left Szanto's office, I told myself it would be simple enough.

That, it turns out, was my fourth mistake.