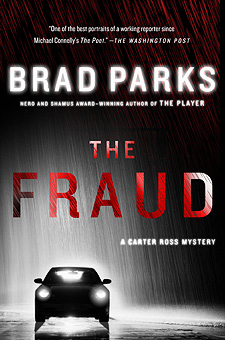 THE FRAUD
A Carter Ross Mystery

A rash of carjackings terrorizing Newark become newsworthy when one such theft ends in the murder of a wealthy banking executive. Affable, wisecracking reporter Carter Ross is assigned the story, but he's weary of only writing about victims of crime who happen to be rich and white. To balance his reporting, he finds a Nigerian immigrant of more modest means who was also killed during a recent carjacking.

When it turns out the two victims knew each other, and may have shared more than just a round of golf during their cut-short lives, Carter is plunged onto the trail of a gang of killer car thieves that includes a sociopathic ex-convict.

Soon, the investigation becomes more than just a news story for Carter, who is forced to make the ultimate choice about who gets to live: him or his unborn child...

"Parks delivers another outstanding thriller with hints of laugh-out-loud humor in his latest Carter Ross book... Parks is an author readers should be adding to their list of beach reads."
—RT Book Reviews (read the full review)

"Parks' sixth Carter Ross story (has) a more serious, reflective tone than previous entries, noted for their comedic appeal. Series fans should rest assured, however, that Carter's witty turns of phrase are still in evidence, and his undeterrable investigating is as engaging as ever."
—Booklist (read the full review)

"The sixth in Brad Parks' award-winning series is as entertaining as its predecessors, and the congenial, self-deprecating Ross gives readers a laugh on every page."
—Inside Jersey (read the full review)

"The Carter Ross series (has) all the excitement and drama of a Hollywood action flick... A terrifically entertaining page-turner."
—Fredericksburg Free Lance-Star (read the full review)

"Another outstanding thriller with hints of laugh-out-loud humor... Parks is an author readers should be adding to their list of beach reads."
—RT Book Reviews (read the full review)

"If reporters were the sort who crafted artisan signs about their business, Brad Parks could have a thriving sideline. (He) writes incisively, accurately and beautifully... about what it means to be a newspaper reporter."
—The Star-Ledger (read the full review)

"A truly captivating piece of crime fiction... It's easy to see why Parks has won so many awards for his writing."
—Jenn's Bookshelves (read the full review)

"These are thought-provoking books.They are stories about the gritty streets of Newark, the crimes and the criminals who see no way out. At the same time, the stories are narrated by a character who has matured over the course of the series while still managing to stay mischievous and witty... He may be covering THE FRAUD, but Carter Ross is the real thing, a man with a conscience."
—Lesa's Book Critiques (read the full review)

"This series keeps getting better... It's no wonder Parks keeps winning awards for his books."
—Word Nerds (read the full review)

"For my money, THE FRAUD cements Brad Parks as one of the best and most entertaining crime and mystery authors in the business... This is his most polished, entertaining and skillful story yet."
—The Literary Lawyer (read the full review)

"Parks melds horrifying crimes with humorous asides in this blend of thriller and whodunt whose suspense will keep you in your chair and whose denouement might knock you out of it."
—Richmond Times-Dispatch (read the full review)