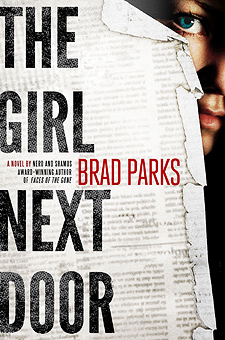 THE GIRL NEXT DOOR
A Carter Ross Mystery

Reading his own newspaper's obituaries, veteran reporter Carter Ross comes across that of a woman named Nancy Marino, who was the victim of a hit-and-run while she was on the job delivering copies of that very paper, the Eagle-Examiner. Struck by the opportunity to write a heroic piece about an everyday woman killed too young, he heads to her wake to gather tributes and anecdotes. It's the last place Ross expects to find controversy—which is exactly what happens when one of Nancy's sisters convinces him that the accident might not have been accidental at all.

It turns out that the kind and generous Nancy may have made a few enemies, starting with her boss at the diner where she was a part-time waitress, and even including the publisher of the Eagle-Examiner. Carter's investigation of this seemingly simple story soon has him in big trouble with his full-time editor and sometime girlfriend, Tina Thompson, not to mention the rest of his bosses at the paper, but he can't let it go—the story is just too good, and it keeps getting better. But will his nose for trouble finally take him too far?

"Reporter as detective hero isn't anything new, but few have been as convincing in the dual role as inkstained wage slave Carter Ross, the fearsomely articulate hero of Parks' fine new novel... Ross believes that the mark of a life well lived is the caliber of stories you tell in your last days. From the evidence here, he's living a masterpiece."
—Booklist (Starred)

"Parks' prodigious gifts for the written word, characterization and plot development are all evident in his third Carter Ross offering... Reading will be compulsive."
—RT Book Reviews 4 1/2 stars (out of 5)

"Brad Parks has crafted another complex and satisfying mystery, full of suspense and newsroom intrigue."
—The (Newark, N.J.) Star-Ledger (read the full review)

"A tantalizing tale that...[combines] grit and wit. Parks not only intrigues the reader with his plot but also impeccably depicts newsrooms and their denizens."
—Richmond Times-Dispatch (read the full review)

"If I were buying a beer for Carter Ross, the irreverent 'unrepentant newspaperman' for the struggling Newark Eagle-Examiner, it would be a local brew served in a bottle and not something foreign served in a glass. He's that kind of guy, and I'm happy he's back in Brad Parks' The Girl Next Door"
—Milwaukee Journal-Sentinel (read the full review)

"Through his portrayal of newsroom culture and the ailing (if once-mighty) American independent paper, Parks ascends the more pulpy shallows of the genre. The Girl Next Door is perfect for the reader who loves an LOL moment but wants a mystery that's more than empty calories."
—Shelf Awareness (read the full review)

"America's favorite crime-fighting newspaper reporter, Carter Ross, has returned for more hilarious hijinks... Regardless of whether you enjoy noir or cozies, The Girl Next Door is highly recommended reading for all mystery fans."
—The Gumshoe Review (read the full review)