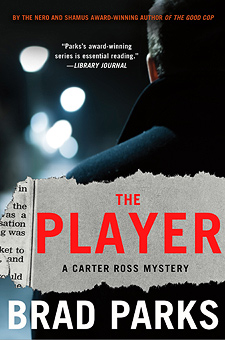 THE PLAYER
A Carter Ross Mystery


When he hears residents of a Newark neighborhood are getting sick—and even dying—from a strange disease, investigative reporter Carter Ross dives into the story—so deep he comes down with the illness himself. With even more motivation to track down the source of the disease, Carter soon hits upon a nearby construction site. But when the project's developer is found dead, and his mob ties surface, Carter knows he's looking at a story much bigger—and with even more dangerous consequences—than an environmental hazard.

Back in the newsroom, Carter has his hands full with his current girlfriend and with the paper's newest eager intern, not to mention his boss and former girlfriend Tina Thompson, who has some news for Carter that's about to make tangling with the mob seem simple by comparison...

PRAISE
"The Player is a highly entertaining tale and one of the best portraits of a working reporter since Michael Connelly's The Poet."
—The Washington Post (read the full review)

"Expect a complicated, thrilling ending with a splash of mayhem. Parks, a gifted storyteller (with shades of Mark Twain or maybe Dave Barry), shows his mastery of the comic absurd behind serious journalism." Starred review
—Library Journal

"What makes Parks such a fantastic storyteller is his main cast of characters, all of whom feel real. Parks has quietly entered the top echelon of the mystery field." (Top Pick! 4 1/2 stars)
—RT Book Reviews

"Muckraking has rarely been so meaty or so funny." Starred review
—Kirkus

"Compulsively readable. . . Ink-stained heroes are a dying breed. Enjoy this one while you can."
—Booklist

"If you haven't read previous books in the series, you've missed out, but Brad Parks knows how to quickly provide background and introduce characters without spoiling the story for those of us who have read all the books. Parks may have won numerous awards, but The Player is my favorite of the five books in the series. The mystery, humor, and relationships all come together beautifully. Brad Parks and Carter Ross just continue to get better."
—Lesa Holstine, Lesa's Book Critiques (read the full review)

"While he spins a serious yarn, he injects enough humor that generates grins. But remember: Grins expose teeth, and The Player delivers a bone-crunching bite."
—Richmond Times-Dispatch (read the full review)

"This is the fifth installment of the Carter Ross series, and does nothing short of demonstrating Parks' brilliance yet again at crafting a novel that is at once funny—with clever dialogue and wry observations—yet has a substantive investigative storyline ... This has quickly become one of my favorite series and I anxiously anticipate each new installment. I am fond of the entire cast of characters from Ross' newsroom, and I especially like where Parks has taken the relationship between Ross and his editor Tina in this novel. Pick up The Player—it's a delightfully complex puzzle absolutely worth losing yourself in."
—Crimespree Magazine (read the full review)

"Carter Ross is a journalist for the Newark Eagle-Examiner with a gift of the gab and an eye for corruption. He's an everyman hero, and one of the genre's most affable investigators. In this mystery, Parks ratchets up the suspense while keeping the lighter tone and laughable realism that are the series' distinctive draws."
—Milwaukee Journal-Sentinel (read the full review)

"Sure it's a mystery but there are so many excellent scenes that I found myself forgetting the plot and just enjoying the company of the characters."
—Washington Independent Review of Books (read the full review)